The Bank of Canada today increased its target for the overnight rate to 1%, with the Bank Rate at 1.25% and the deposit rate at 1%.

Housing affordability has been a long-run Canadian concern. Since its last announcement in March, the Bank continues to set its course for increased Quantitative Tightening (QT). The Bank will continue to transition out of its pandemic reinvestment phase, effective April 25th.

As seen over the past 2 years, quantitative easing refers to taking actions to reduce borrowing rates to help stimulate growth in the economy. In conjunction, quantitative tightening reduces overheating in an economy by increasing borrowing rates, as we have seen over the past few months. Although rates continue to rise, this was inevitable as we would eventually need to resurface to pre-pandemic levels.

With vaccination rates declining and restrictions lifting across Canada and the world, consumer spending and local businesses are booming. However, they are facing new constraints with Inflation and excess demand. Due to the combination of both, many businesses have increased their prices with hopes of competing in today’s global economy.

The Bank forecasts that Canada’s economy will grow by 4.25% this year. Before slowing to 3.25% in 2023 and 2.25% in 2024. Robust business investment, labour productivity growth and higher immigration will add to the economy’s productive capacity. While higher interest rates should moderate growth in domestic demand.

CPI inflation in Canada stands at 5.7%, still above the Bank of Canada’s forecast back in the January Monetary Policy Report (MPR). In large, Inflation is being driven by rising energy and food prices and supply disruptions, as the War in Ukraine continues to raise the prices of oil, gas, and other primary resources around the world. Further international constrain arrises with the Covid outbreak in China this past week and the global efforts to repair the damages of the natural disasters felt around the world in Q1 of this year.

“With the economy moving into excess demand and inflation persisting well above target, the Governing Council judges that interest rates will need to rise further. The policy interest rate is the Bank’s primary monetary policy instrument, and quantitative tightening will complement increases in the policy rate. The timing and pace of further increases in the policy rate will be guided by the Bank’s ongoing assessment of the economy and its commitment to achieving the 2% inflation target.”

A widespread domestic topic that has been on everyone’s minds is the question of housing affordability. Trudeau and the Canadian government announced their new intentions for the Canadian Budget 2022 last week and it proposes a few interesting solutions. A huge focal point has been placed on increasing Canadian housing, adding more affordable housing, and increasing restrictions that artificially raise the price of purchasing a home.

As the Canadian population continues to grow sharply, the forefront of the housing affordability problem is insufficient supply. Thanks to the federal government’s policy to rapidly increase immigration since 2015, new household formation has risen far faster than housing completions, both for rent and purchase.

Since the Q4 of 2019, the average benchmark price in Canada is up 34.2%. Although the rise in housing costs has risen across the country, they have been even sharper in certain cities. Housing prices have increased 46% in Halifax, 40.9% in Ottawa, 34% in Toronto, 33.2% in Montreal and 29.6% in Vancouver.

As a result, higher prices and larger mortgages have made buyers more sensitive to interest rate changes compared to 10 or 15 years ago. Many people have begun questioning why their borrowing abilities are less than their friends or colleagues with the same income and debt levels. If someone you know purchased a property a year ago, the cost of that home could already be up to 30% higher. As a result, your chances of being approved for a similar mortgage will be less than theirs.

the Mortgage Professionals of Canada (MPC), the national association representing Canada’s mortgage industry, urges parliament to hold onto their promises of making first-time home purchases simpler and more affordable for First Time Homebuyers (FTHB). MPC has long fought for increased affordability in the housing sector through projects such as allowing 30-year amortization for insured mortgages. Which could ultimately lower monthly mortgage payments for new homebuyers.

The federal government has approved over $10 billion in new housing-related spending. This budget will be expended over the next five years with the goal of supporting initiatives aimed at increasing the housing supply. In addition, new programs will assist FTHB to get into the housing market, helping protect both buyers and renters. The government has even gone as far as blocking any foreign investment for the next 2 years.

The federal government’s 2022 Budget announces plans to prohibit foreign buyers and investors, including commercial enterprises, from purchasing non-recreational residential property in Canada over the next two years.

These restrictions won’t apply to Canadian citizens, permanent residents, refugees, international students on the path to permanent residency (in certain circumstances), and individuals on work permits who are residing in Canada. Moreover, non-resident, non-Canadians who own homes that are being underused or left vacant would be subject to the Underused Housing Tax once it’s in effect.

However, there is speculation on the level of impact this new policy will have. Many believe the ban will have a negligible impact on home prices. As we had seen during the pandemic, home prices continued to escalate to unforeseen heights despite there being virtually no foreign money during the borders foreclosures. This leads us to believe that our housing affordability problem is being caused domestically, not by foreign homebuyers.

For those who plan to sell a property that they’ve held for less than 12 months, the government will apply the full tax rate on their profits as business income (instead of capital gain), starting on January 1st, 2023. Exemptions would apply for dispositions due to certain circumstances, which can include death, disability, serious illness, the birth of a child, change in employment or work location, insolvency, separation, or divorce.

“We will prevent foreign investors from parking their money in Canada by buying up homes,” said Finance Minister Chrystia Freeland during her speech. “We will make sure that houses are being used as homes for Canadian families, rather than as a speculative financial asset class.”

The federal government has announced its plans to extend the First-Time Home Buyer Incentive (FTHBI) program to March 31, 2025. Originally, the program was meant to expire in September of this year, but after a national bust of its use, they decided on its extension. Unfortunately, the program’s underutilization can be seen through its expenditure reports. As of December 2021, the government has approved just $270 million in funded mortgages of the $1.25 billion available in the program.

To ensure that more affordable housing can be built quickly, Budget 2022 proposes to provide $1.5 billion over two years, starting in 2022-23, to extend the Rapid Housing Initiative. This new funding is expected to create at least 6,000 new affordable housing units, with at least 25% of funding going towards women-focused housing projects.

The 2022 Federal Budget proposes a new registered savings vehicle for eligible first-time homeowners: the Tax-Free First Home Savings Account (FHSA). The FHSA will give first-time home buyers the ability to save up to $40,000. This account will be unique in that contributions will be tax-deductible— similar to a registered retirement savings plan (RRSP). However, qualifying withdrawals (including investment earnings) will be non-taxable, similar to a tax-free savings account (TFSA). Amounts that are withdrawn to make a qualifying first home purchase won’t be subject to tax. However, amounts that are withdrawn for any other purpose will be taxable.

A few Highlights and Eligibility Requirements

Statistics Canada released the March Labour Force Survey last week, reporting a gain of 72,500 jobs from the already high 337,000 additions in February. Employment increased in both the goods and services-producing sectors.

Adding to inflationary pressure is the rise in Canadian wage rates coming from the excess demand for labour. Total hours worked rose 1.3% in March. Average hourly wages increased 3.4% on a year-over-year basis, up from 3.1% in February. 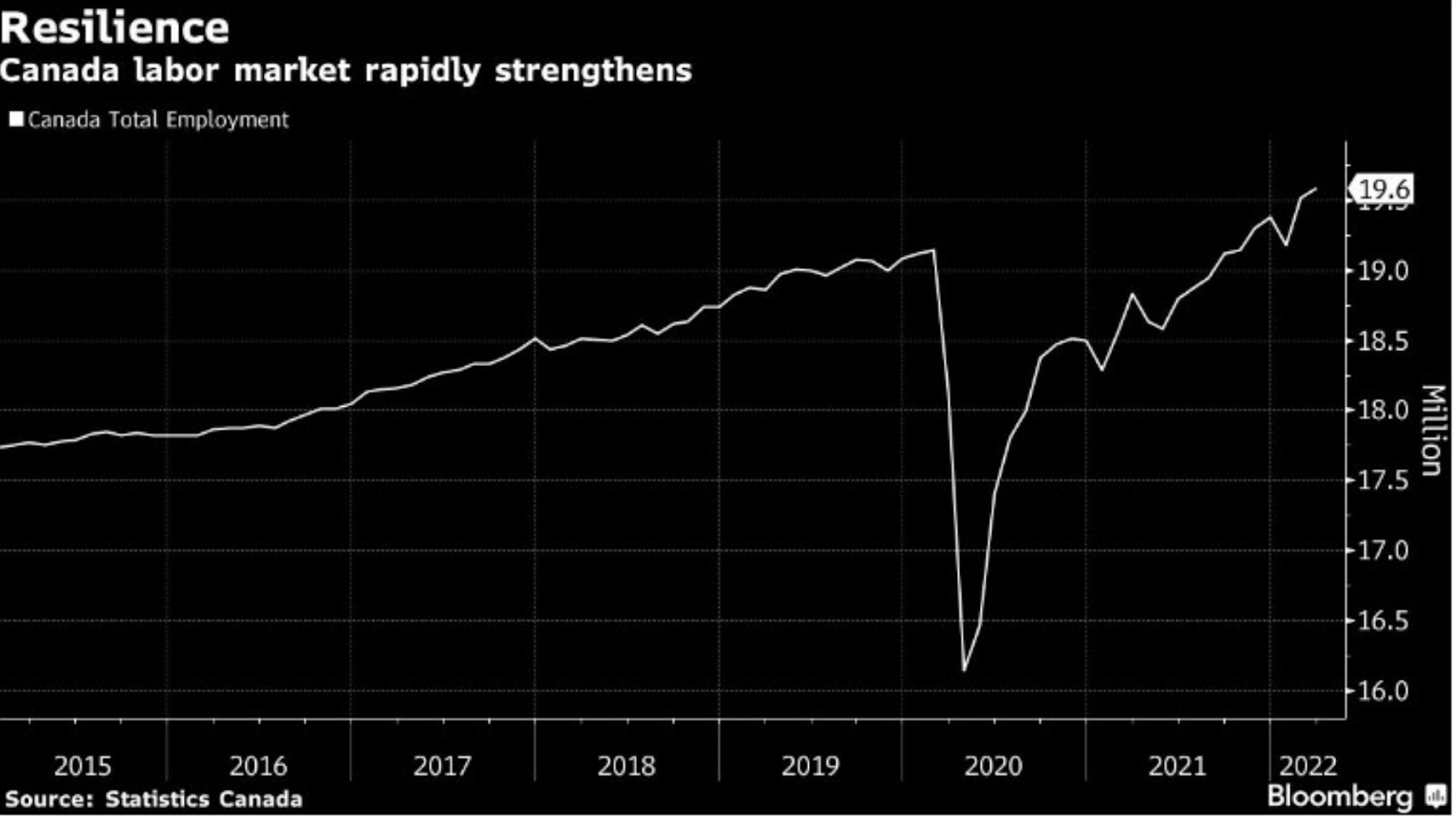 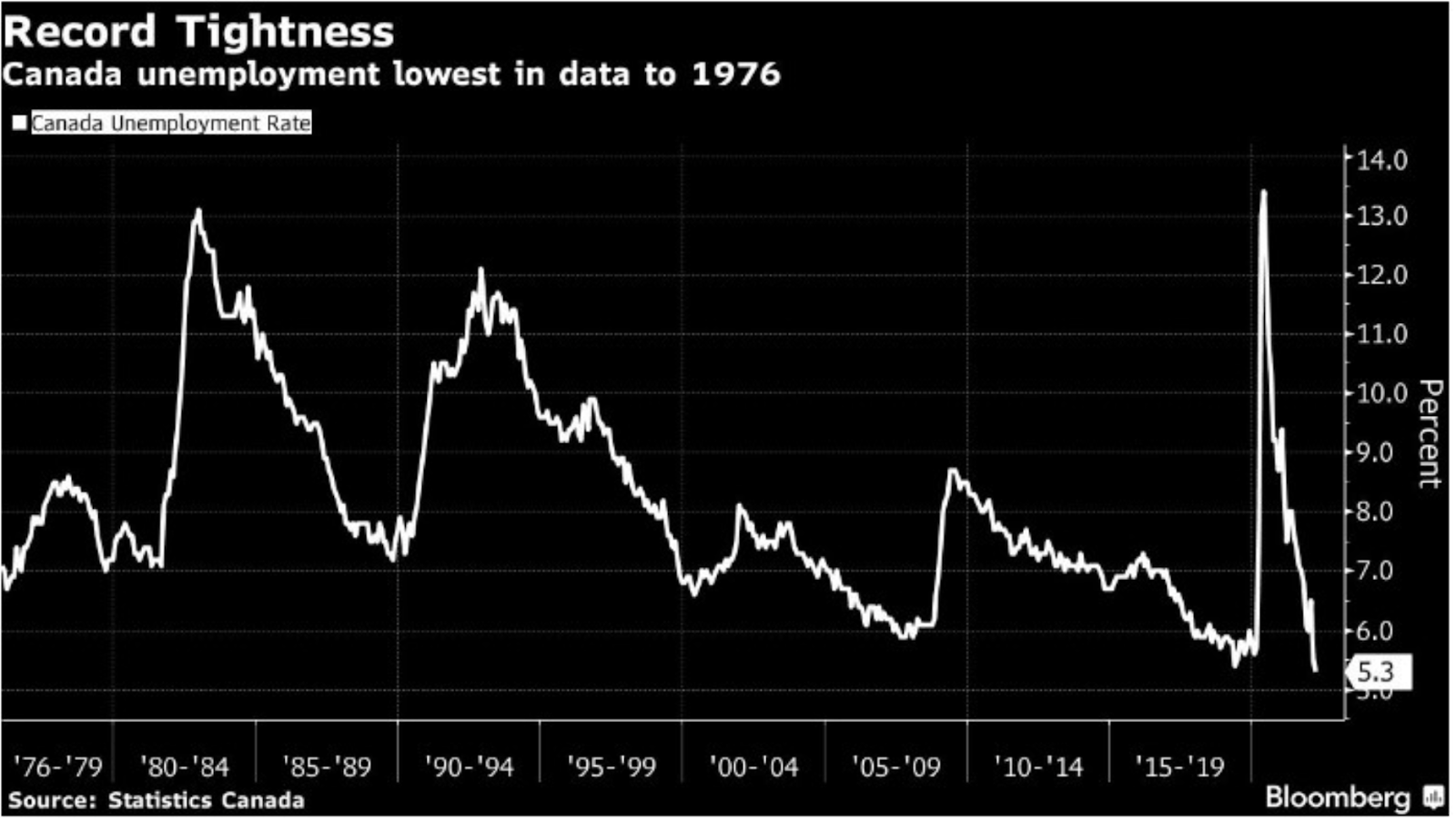 As represented in the above graphs, the labour market has been on a sharp rise since its lowest peak during the early onset of the pandemic in 2020. Today, we are seeing some of the lowest unemployment rates since 1976.

The overnight rate was 1.75% in February 2020, just before the pandemic began. Since then, inflation has surged from just over 2% to 5.7% in February. The March inflation data will be released on April 20th, 2022, and it is widely expected to rise further. Indeed, the gauge of global food prices inflation is currently at a record high, exacerbated by the disruptions associated with the Ukraine war.

The Bank of Canada’s recent Business Outlook Survey shows that businesses expect inflation to continue for two years. All actions underwent by the Bank show intention of raising the overnight rate to around 3% over the next year. With its increased quantitative tightening it will begin levelling its balance sheet by reducing its holdings of Government of Canada bonds. Market activity suggests that housing markets have already responded to rising mortgage rates. Supply has increased, and multiple-bidding activity has weakened. For the first time since 2020, a majority of Canadians now believe the economy will weaken over the next six months.

As all these new attempts to increase housing affordability are employed over the next five years, many are panicking about the rise in interest rates. The overall consensus is that the rise in rates was, and is, inevitable. The number of prime rate increases needed to meet the current fixed rates is still many. Any panic to lock in your variable rate mortgages should subside as the economy continues to recover and consumer disposable income increases.

We hope that this blog was able to help you better understand the current economic environment surrounding housing affordability, employment, and interest rate changes. If you are concerned with how these changes will affect your mortgage, or your ability to apply for a mortgage, feel free to email us today at darcy@themortgageprofessionals.ca, or contact a mortgage professional today at 604-889-7343.

Explore our other blogs to read up on the latest news and events in the mortgage world.

One Comment on “The Latest Bank of Canada Rate Increase and its Effects on Housing Affordability.”