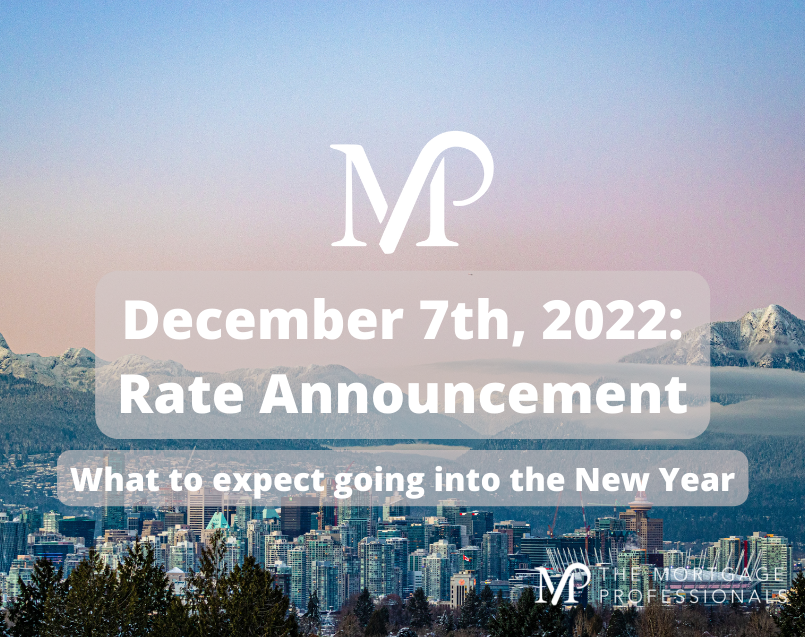 Today the bank of Canada has made its final rate announcement of the year and has once again raised its overnight lending rate by 0.50%. In today’s blog, we will be your one-stop shop for understanding what this means as a Canadian mortgage holder and what to expect going into the new year.

As we come to the end of 2022, we can look back at a pretty hectic interest rate environment for most Canadian homeowners, as well as for the Canadian economy as a whole.

The reason for the continued interest rate hikes, as stated by Macklem— Governor of the Bank of Canada— is that the Canadian market is still overheated. Unemployment has been decreasing as the labour market continues to grow, but fears of high inflation and excess demand are still present. In fact, lack of supply remains the problem for most Canadian sectors, except for Canadian housing. More on that will be discussed in further detail below.

Today the Bank made its final rate announcement for the year by raising the overnight lending rate by 0.50%— Bringing the now Prime Rate to 6.45%, and the TD Prime Rate to 6.60%. As TD’s Prime is always 15bps (or 0.15%) higher than other primary lending institutions. You can read the full press release from the Bank’s governor, Tiff Macklem, here.

“In Canada, GDP growth in the third quarter was stronger than expected, and the economy continued to operate in excess demand. Canada’s labour market remains tight, with unemployment near historic lows. While commodity exports have been strong, there is growing evidence that tighter monetary policy is restraining domestic demand: consumption moderated in the third quarter, and housing market activity continues to decline. Overall, the data since the October MPR support the Bank’s outlook that growth will essentially stall through the end of this year and the first half of next year.”

The Bank of Canada Press Release

As it has been, Variable-Rate mortgage holders will be the ones to absorb the shock

We have already written a few blogs concerning Trigger Rates, so if you’re in need of a refresher check out any of our previous blogs:

Rates for variable mortgages were around 5.1% at the end of October 2022. In this mortgage rate environment, we estimate that about 50% of variable-rate mortgages with fixed payments (Non-adjustable) have already reached their trigger rate. This represents about 13% of all Canadian mortgages.

Since the last rate announcement on October 26th, 2022, the Bank of Canada had increased the Prime Rate by another 0.50%. Potentially causing an additional 15% of variable-rate mortgages (with fixed payments) to reach their trigger rate. This would estimate around 65% of Variable Rate mortgage holders with fixed payments (or around 17% of all Canadian mortgages).

Nearly all mortgages in 2020 & 2021 were Variable rate mortgages with fixed payments. A mortgage with a 30-year amortization period and an interest rate of 1.5% would have a corresponding trigger rate of 4.2%. In this case, we estimate that the monthly payment would have increased by about 20% by the end of October 2022.

Taken from the Bank of Canada

As a recap, roughly 65% of variable-rate mortgages with fixed payments will have reached their Trigger Rate by early 2023. In order to avoid the nearly 20% increase in monthly payments, many have tried the following:

However, if you did secure your variable rate mortgage between 2020 and 2021 there may still be a bright side. There is a probable chance that you were able to pay off more of your principal while rates were still low. Regardless, economists are estimating a long-awaited decrease in interest rates by Q3 of 2023.

Overall, The governor of the Bank of Canada has announced that they have been working closely with primary lending institutions (The banks). Ideally working together to minimize the payment hike shock for anyone who has hit their Trigger Rate. Stating that each situation will be treated on a case-by-case scenario.

That being said, if you have reached your trigger rate and are in need of a consultation for your unique situation, the best thing to do is contact us. Consulting a Mortgage Professional is the best way to ensure you have someone who is working with your best interest in mind.

As mortgage rates rise and household incomes decline, renter households will have a harder time buying a home. Since rental supply is limited, rental markets will be more competitive – and rents are likely to rise, making affordability even more challenging. Paired with the projected decline in employment and income conditions will worsen the affordability crisis for renters.

Home sales in some of the country’s largest cities were down over 50% year-over-year in November. A 53% drop in sales was recorded in Greater Vancouver over the past year. Comparing November 2021 to November 2022, the MLS Home Price Index benchmark price was down 0.5% to $1,131,600.

The gamble that the Bank of Canada is playing can be depicted by the Phillips Curve. A curve used by economists to hypothesize a correlation between a reduction in unemployment and increased rates of wage rises within an economy. The Phillips curve states that inflation and unemployment have an inverse relationship. Higher inflation is associated with lower unemployment and vice versa. The goal here is to decrease inflation without increasing unemployment. While employment growth slowed in November, the jobless rate ticked downward. Rising wages and the stronger-than-expected Q3 GDP growth point to further rate hikes.

Read the full report released by the Government of Canada here.

Concluding Point for the final rate announcement of 2022

In either case, additional rate hikes early next year are likely. Even when the central bank pauses, it will not pivot to rate cuts for an extended period. Market-driven longer-term interest rates have fallen significantly as market participants expect a recession in 2023. Fixed mortgage rates have fallen as well. The inverted yield curve will remain through much of 2023, with a housing recovery in 2024.

We can expect 1-2 more rate hikes going into 2023 and hopefully will begin to see some inflationary stabilization as we return closer to the 2% inflation target rate by Q4 of 2023 and in early 2024.

If you want to learn more, check out Dominion Lending Centre’s very own economist, Sherry Cooper’s youtube Channel where she breaks down all of the Bank of Canada’s announcements: Watch here.

The next scheduled date for announcing the overnight rate target is January 25, 2023.

Give your Mortgage Professional a Call Today

Understanding all the recent rate increases can be challenging. It may feel as if finding a solution to your current situation can be difficult. There are many individual factors that will affect your mortgage. If you would like to schedule a consultation, or simply want to give us a call, we are happy to help in any way we can. Even if it’s to provide a little peace of mind during these complicated times.

Contact Darcy Doyle at the Mortgage Professionals today by calling 604-889-7343 or send us an email at darcy@themortgageprofessionals.ca